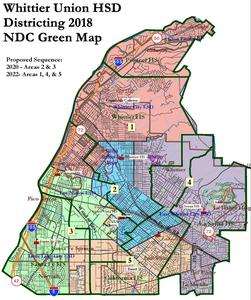 6:30 p.m. Wednesday, April 24
The Los Angeles County Committee on School District Organization will hold a public hearing on the proposal to define and establish trustee areas within the Whittier Union High School District, as well as the proposal to hold by-trustee area elections beginning in November 2020, at 6:30 p.m. Wednesday, April 24 in the Sierra Education Center Board Room.
The public hearing follows the Board of Trustees' selection of the NDC Green Map and a sequence of elections as part of the District's transition from at-large elections to by-trustee area elections.
Effective November 2020, residents living within the Whittier Union boundaries will vote for a single governing board member candidate residing in their newly drawn trustee-area.
The Board of Trustees voted in October 2018 to begin the process of shifting to the new election model. Whittier Union subsequently held seven public hearings and six community workshops to gather stakeholder input. A total of seven maps were drafted, including four drawn by a demographer and three submitted by members of the public.
Under the selected map, the first election will take place in 2020 beginning with Areas 2 and 3. Areas 1, 4 and 5 will be up for election in 2022.
A final hearing will be held before the Los Angeles County Committee on School District Organization in Downey at which the Committee will determine if the District’s request to establish trustee areas should be granted.
For more information, contact the Superintendent's Office at (562) 698-8121, ext. 1000, or visit www.elections.wuhsd.org.