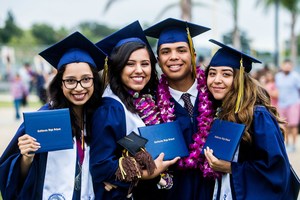 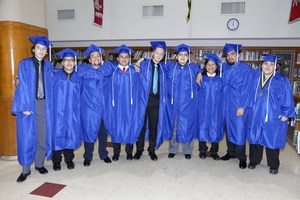 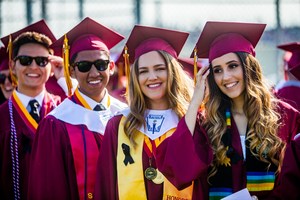 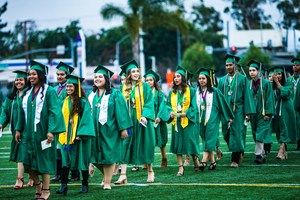 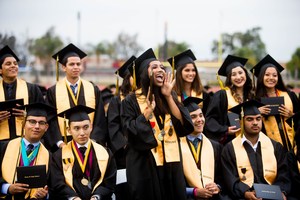 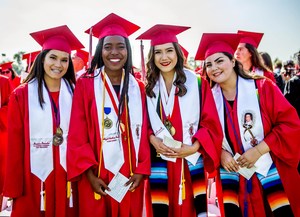 Nearly 3,000 students from Whittier Union High School District’s five comprehensive high schools, two alternative high schools, adult school and transition program celebrated the completion of their high school careers last week with joyous commencement ceremonies.
Frontier High School and the District’s transition program held ceremonies on June 5. California, Sierra Vista and Santa Fe high schools and the Whittier Adult School held ceremonies on June 6. Whittier, La Serna and Pioneer high schools celebrated commencement on June 7.
Superintendent Martin Plourde congratulated members of the Class of 2017 for successfully navigating the halls and classrooms of Whittier Union’s schools and forging ahead toward the next chapter of their lives.
“This milestone represents our students’ years of hard work and dedication toward achieving their personal and academic goals, and we, as educators, are proud to share in their success,” Plourde said. “It hasn’t been an easy road for all of them, but we have provided them a strong foundation upon which to stand and tackle the next challenge before them, whether that’s college or career. These students are more than just grade point averages – they are amazing kids who will go on to accomplish great things and continue to make the Whittier Union community proud.”
Most of the District’s graduates are pursuing higher education at four-year universities – including Harvard and Stanford – community colleges and technical education schools in the state and throughout the country. Some will also enter military academies and military service.
“After 13 years of school, here we are to celebrate what we have accomplished,” said Madison Gutierrez, one of Whittier High’s eight valedictorians who is headed to UCLA. “We are here today, ready to become ‘kindergarteners’ in the next classroom of our lives. Cardinals, we are onto our next adventure, but let us never forget where we came from and who helped us learn to fly.”
Among Whittier High’s valedictorians were Diego Avina (Chapman University), Beverly Delgado (Brigham Young University), Kelly Hollman (UCLA), Fernando Jauregui (USC), Kevin Kohn (UCLA), Jisel Miranda (UCLA) and David Sarkissian (UCLA). The salutatorian was Stephanie Gotts (Cal State Fullerton).
Cal High’s valedictorians were Lauren Anderson (Harvard) and Dora Arcos (UCLA). The salutatorians were Jonathan Ayson (Stanford), Nicole Cosico (UCLA), Olivia Huizar (Azusa Pacific University) and Madison Pasillas (Cal Poly Pomona).
La Serna’s valedictorians were Safia Hassan (Scripps College), Timothy Overbeck (UCLA), Chanel Young (UCLA) and Reuben Rahmeyer (Columbia University). The salutatorian was Celina Nicole Dominguez (UCLA).
Pioneer’s valedictorian was Emily Iniguez (UCLA) and the salutatorian was Danielle Diaz (UC Berkeley).
Santa Fe’s valedictorian was Sasha Gilmore (Dartmouth). The salutatorians were Jesus Muneton (UCLA), Giovanni Juarez (UCLA) and Janette Juarez (UC San Diego).
Sierra Vista’s valedictorian was Elisa Ruvalcaba and the salutatorians were Andrew Lund and Ashley Betancourth.
Frontier High School’s John Amaro encouraged his fellow graduates to continue to chase the light at the end of the tunnel and persevere despite whatever challenges they face.
“We all go through so many ups and downs, changes, challenges and sometimes we have felt like just giving up. But with the encouragement of the staff, we didn’t stop. We didn’t give up. We kept on persevering and pushing through. And now here we are,” said Amara, who will continue his education at East Los Angeles College. “I have learned over the years that education is a treasure that we earn and can never be taken away from us.”
To see graduation photos, visit: www.facebook.com/wuhsd.