Building a Culture of Student Success 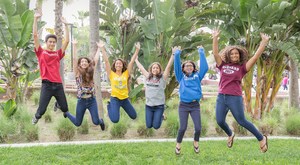 Built on a culture of collaboration, inclusiveness and the belief that demographics do not determine destiny, Whittier Union High School District provides students a widespread system of support to ensure each is given every opportunity to succeed and flourish in a 21st century world.

Whittier Union’s earned reputation for attaining and sustaining substantial academic progress among a diverse student population of 12,000 has attracted the attention of statewide educators and international researchers who visit each year to learn how it has succeeded in raising student achievement.

This success has been more than 15 years in the making, starting with the District’s pioneering Whatever It Takes initiative, which prepares students for a future that will be determined not by a student’s ethnicity or family income, but by their excelling academically in the most rigorous course of study provided by deeply committed and highly qualified teachers.

Under the initiative’s Pyramid of Interventions, teams of teachers collaborate to create consistent curriculum and common tests, which are regularly analyzed and used to adjust lesson plans and instruction. Students who need additional support receive timely and specific assistance, including embedded tutorials, additional guidance counselors and academic mentors.

The District’s continued academic achievement is directly related to the efforts of its exemplary Board of Trustees, teachers and staff to ensure equity, access and excellence for all students.