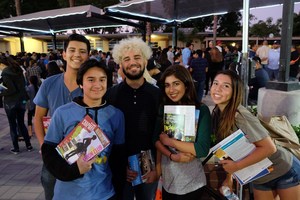 Whittier Union has spearheaded the important task of disaggregating achievement data – from attendance rates to graduation rates – to know which students need additional support, leading to continual improvement in its student achievement over the last 15 years.
Below are just some of ways WUHSD measures success.
Four-Year Cohort Graduation Rate More Whittier Union students than ever before are earning the credits they need to graduate on time, earning among the highest on-target to graduate rates in District history.
A-G Completion Rate More than 60 percent of students are completing the courses necessary for entrance into the University of California and California State University systems, known as the a-g requirements. The courses mark a level of academic preparation students should achieve to successfully take on university-level work.
Attendance Rates

Attendance rates across Whittier Union schools have consistently followed an upward trend with a District average of 96.4 percent in 2016-17, demonstrating increased student engagement.
Report to the Community 2017