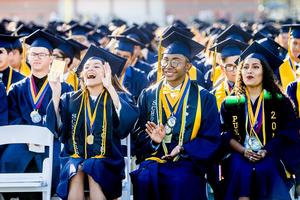 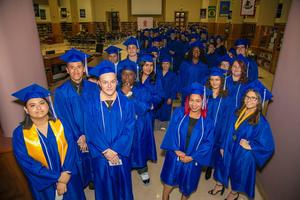 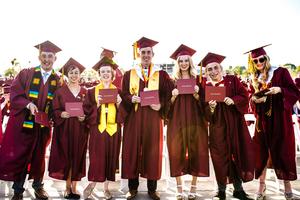 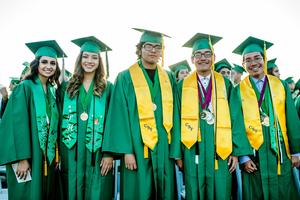 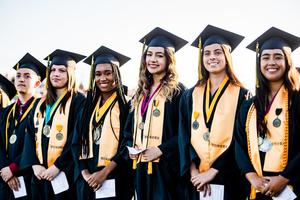 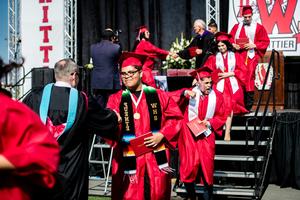 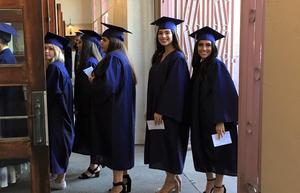 The Whittier Union High School District celebrated the graduation of nearly 3,000 students during culminating ceremonies that included members of the Class of 2018 throwing their caps in the air, proud teachers and staff cheering them on and thousands of family members reveling in joy.
Frontier High School and the District’s transition program held ceremonies on June 4. California, Santa Fe and Sierra Vista high schools and the Whittier Adult School held ceremonies on June 5. Whittier, La Serna and Pioneer high schools celebrated commencement on June 6. In all, the District graduated approximately 2,987 students who will pursue the next step of their academic and professional careers.
“It is an honor to witness the Class of 2018 take this critical step into the next chapter of their lives, which are filled with tremendous potential for success as they pursue college, careers or the military,” Whittier Union High School District Superintendent Martin Plourde said. “Our students are leaving our campuses prepared for what’s to come, ready for the challenges ahead and equipped to pursue their dreams with confidence. I want to congratulate all of our students for achieving this milestone – the first of many more to come.”
A majority of the District’s graduates are pursuing higher education at four-year universities – including Stanford, Columbia and UC Berkeley – community colleges, and vocational schools in the state and throughout the country. Many students are also pursuing science, technology, engineering and mathematics (STEM) careers. Some students will also enter military service and military academies, including the U.S. Air Force Academy, or join the workforce.
“It is through hard work, determination, and resiliency that each one of us will forge a path that is unique and reflective of our individual strengths,” said Pioneer High School Valedictorian Paola Benitez, who will attend UCLA in the fall and pursue a career as a clinical social worker. “I say to you, the Class of 2018, let us not allow others’ views and limitations stop us from reaching our individual greatness.”
Pioneer’s salutatorian was Alyssa Cayetano, who will attend UC San Diego.
Among California High School’s valedictorians were Kelly Clavel (Stanford) and Wendy Colin (UC Berkeley). The salutatorians were Alphonso Diaz (UC Berkeley), Jack Fitzgerald (US Air Force Academy), Edith Garcia (UC Irvine) and Natalia Gonzalez (Cal Poly Pomona).
La Serna’s valedictorians were Maya Delgado (Columbia University), Kyle Lien (UCLA), Narek Stepanian (UC Berkeley) and Christen Tai (UCLA).
Santa Fe High’s valedictorian was Erich Martinez (UC Berkeley). The salutatorians were Eric Gonzalez (UC Irvine), Karen Gonzalez (USC) and David Rodriguez-Sosa (UC Davis).
Whittier High School’s valedictorians were Analaura Amezquita (Stanford University), Annika Ancich (UCLA) and Yasmin Munoz (UCLA).
Sierra Vista’s valedictorian was Marya Nunez and the salutatorian was Melissa Dietz.
Among Frontier High School’s student speakers were Kyle Elwood, Daisy Escareno and Briana Rivera, who shared a message of perseverance with audience members and her peers.
“No matter how difficult things may seem, you must make the choice to persist and to choose the path that will get you where you want to end up even if that path takes the most work,” Rivera said. “You will succeed, because you – as a Frontier High graduate – know better than the average high school graduate that nothing in this life is accomplished without persevering.”
To see graduation photos, visit www.facebook.com/wuhsd.